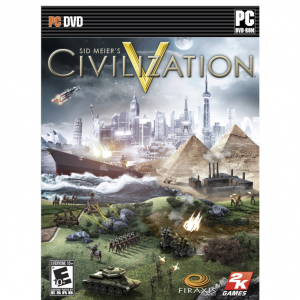 Published by
2K Games
Genre
Strategy
Release Date
September 21, 2010
Game Homepage
Click to visit
Sid Meier's Civilization V is the fifth offering in the multi-award winning Civilization turn-based PC strategy game series. As with earlier installments in the series, Civilization V features the famous "just one more turn" addictive gameplay that has made it one of the greatest game series of all time. In addition to this it also features improved diplomacy, unprecedented modding tools and functionality, new ranged combat over a hex oriented board rather than squares, an in-game community hub facilitating improved online play and more. With over nine million units sold worldwide, and unprecedented critical acclaim from fans and press around the world, Sid Meier's Civilization is recognized as one of the greatest strategy franchises of all-time. Now, Firaxis Games will take this incredibly fun and addictive strategy game to unprecedented heights by adding new ways to play and win; new tools to manage and expand your civilization; extensive modding capabilities; and intensely competitive multiplayer options. Civilization V comes to life in a beautifully detailed, living world that will elevate the gameplay experience to a whole new level making it a must-have for gamers around the globe. In Civilization V, players strive to become Ruler of the World by establishing and leading a civilization from the dawn of man into the space age, waging war, conducting diplomacy, discovering new technologies, going head-to-head with some of history's greatest leaders and building the most powerful empire the world has ever known.
10 views April 30, 2013 - 01:30
0 0
Sid Meier's Civilization V Trailer

Paul Top 10 Reviewer 5 reviews
Report this review Comments (0) | Was this review helpful to you? 0 0
Always loved Civ
November 21, 2014
Overall rating
4.2
Gameplay
3.5
Graphics
4.5
Sound
4.5
Civilization has always been one of my favorite games. I tried out this game, and though there are quite a few changes, I still quite enjoy the game. Perhaps don't make the game so simplistic to play in the next generation though? One button pushing can get a bit banal.

Linda Top 50 Reviewer 3 reviews
Report this review Comments (0) | Was this review helpful to you? 0 0
Interesting
April 06, 2013
Overall rating
4.0
Gameplay
4.0
Graphics
3.5
Sound
4.5
The game is different enough from the prior versions to be interesting to play. It is also similiar in play to the prior versions that you can play the game without referring much to the electronic manual. Downside - not ready for release. Regular and consistent lock-ups or crashes.

Ted Top 10 Reviewer 4 reviews
Report this review Comments (0) | Was this review helpful to you? 0 0
Like watching paint dry..
April 06, 2013
Overall rating
3.7
Gameplay
2.5
Graphics
4.5
Sound
4.0
Just to give this review some perspective, I've been playing the various iterations of Civ for a very, very long time. I spend endless hours on 3 and 4, balancing game commitments and my real life. When Civ 5 was announced, I didn't hesitate. I bought it immediately.

In short, it didn't take me long before I realized that this new Civ was nothing like the Civ of old. I've never played Revolutions, but I've heard there is a lot of overlap. I don't know. What I do know is that this game is boring. Really, really boring. Never have I clicked the "next turn" button like I have here. Maybe it's because it takes forever to build anything...so long, in fact, that it's easier just to hoard gold and buy things. Maybe it's because expansion and/or conquest isn't really encouraged. The seemingly massive happiness hit just makes it unreasonable. So I sit there, just watching the world slowly go by.

James Top 10 Reviewer 7 reviews
Report this review Comments (0) | Was this review helpful to you? 0 0
A new CIV
April 02, 2013
Overall rating
4.3
Gameplay
4.0
Graphics
4.5
Sound
4.5
All the detail is still there but you need to look for it rather than it being in your face; so you can run a very streamlined campaign without getting into the nitty-gritty of which tile will the city work on this turn if you want, or you can micromanage to your heart's desire. "Policies" being tied to culture is cool, and I look forward to getting further into the game. I've played one campaign so far, and found most of the streamlining helpful.

Linda Top 50 Reviewer 3 reviews
Report this review Comments (0) | Was this review helpful to you? 0 0
View all user reviews

Joe
"This makes for a perfect dessert and it's delicious. The..."

Emma
"I knew my family loved it when we were fighting..."

Ben
" Made this the first time following the instructions, and..."

Ben
"These turned out great and has become a family favorite..."

Emma
"These were well received by my kids. I substituted the..."

Submitted by: Joe
on 28 June 2016
Listing: Tofu Quiche with Broccoli

Submitted by: demo
on 15 October 2014
Listing: Edge of Tomorrow

Submitted by: demoadmin
on 27 September 2014
Listing: How to sell digital products